10/3/2022
Our Senior Pilgrimage didn't take place as originally planned, but it still created memories that our senior class will never forget. Read the full recap here.
At 4:30 p.m., the Friday before the Senior Pilgrimage Retreat, we received a call from Camp Hamilton that their watermain broke. Without freshwater and flushing toilets, they couldn’t host us—a group of a 150—for the retreat as planned. Over the next four hours, we called and FaceTimed and Zoomed our way through all possible scenarios before settling on a retreat on campus with a new timeline. Later that night, we emailed all the seniors and parents about the update to the retreat, and for a while there was a concern about nobody showing up to a retreat on campus.

That concern was dismissed by 8:30 a.m. the following morning as 120 seniors and 15 faculty members joined the Board of Directors for a light breakfast and the first talk of the retreat. They totally showed up! Much of the success goes to the senior retreat leaders who used their cell phones and social media accounts to quickly communicate to their classmates and hype the retreat. That’s right—teenagers using cell phones and social media made this retreat a success.

Once here, the magic of the day blossomed. We had great weather. The leaders shared their testimony and encouraged their friends to reflect on where they have come over the past three years and who they want to be as seniors on campus this year. In between the talks, students chalked up the campus with spirited images the great outdoors and wrote down the worries they wanted to leave behind. They used Post-its to sprinkle loving messages to friends and teachers throughout Snyder and Bellarmine Hall. Later on they sang songs and danced together. While the location of the retreat had changed—the energy of the day was clearly recognizable. It was a Bellarmine Senior Pilgrimage.

After we got the phone call that Camp Hamilton had to cancel, Jenny Phillips shared that there was one year when Pilgrimage was delayed and supposed to be rescheduled. It never happened and the class didn’t have that bonding moment. We believe that this retreat sets the tone for the year—student testimony, prayer, mass, and quality time together make a difference. As the adults running the retreat, we weren’t going to quit on them when things got hard, but most importantly—they seniors didn’t quit either. We loved how they showed up, supported each other, and were transformed by the experience.

During the Senior Mass, the week after the retreat, Owen Price shared his experience with the class. He spoke about the result of COVID and distance learning, how he didn’t have the amount of memories with friends as he would have expected as a senior—some much time together was simply lost during COVID. And when he heard about the change of plans, he considered skipping to go to a UW football game. But then he recognized that one of the things that sets Bellarmine apart is our retreat program. He showed up despite being tempted away by entertainment. During this retreat, the activities forced him out of his comfort zone and encouraged him to have conversations with people he didn’t regularly associate with. He testified, “On this retreat, I saw God in the beautiful weather that was gifted to us along with seeing Him in each of my classmates who have their unique gifts and are awesome people.”

We are so very proud of what these students accomplished. They are a special class that reminded us adults of why we love working here. So from us to all you seniors and senior parents, thanks for giving us a memory we won’t forget. 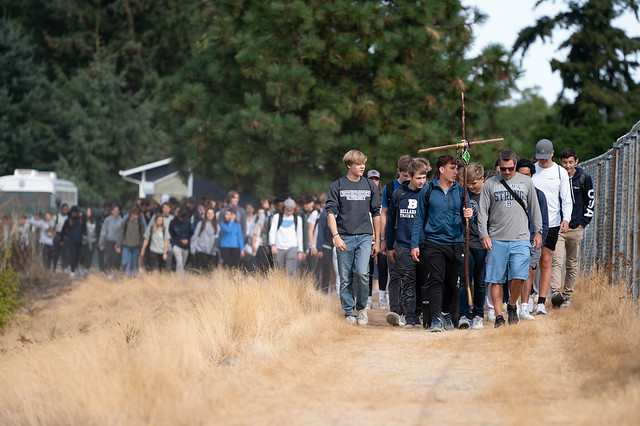